How to Win A Wallflower 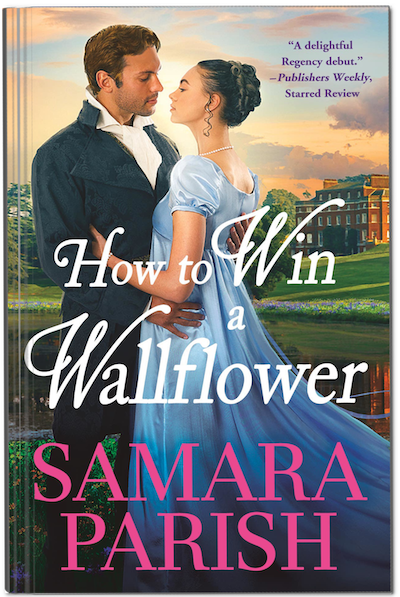 How to Win a Wallflower

When hearts are in play, a wallflower will put everything on the line…

When John Barnesworth inherits unexpectedly, he abandons his solitude returns to London’s social maelstrom to settle his brother’s affairs, only to discover his estates are crumbling and he is now betrothed London’s cruellest lady. Her dowry might save him from ruin, but at what cost? His only hope lies with the vivacious, extroverted little sister of his best friend. Lady Charlotte Stirling’s audacious solution to John’s troubles might actually work…Presuming their ruse is not discovered. Presuming John can keep from falling for the one woman who is off-limits

Charlotte is not a woman who likes to lose, and the thought of her childhood crush married to her arch-nemesis is maddening. But John has a perfect memory. She can charm anyone. There isn’t a hand of cards they can’t win to earn his freedom. As the chips start stacking up and the stakes get higher, the plan falls apart as fast as she is falling in love. Can a wallflower like John find happiness in her high society life? Perhaps love is the greatest gamble of all.

Order How to Win A Wallflower from Amazon, Apple, Barnes & Noble, Book Depository, Kobo, or from your local bookstore.

How to Win A Wallflower

Rebels With a Cause, Book 3

Across town, Charlotte sat on a stool behind some palms in the ladies’ room at the Bradenstocks’ ball, easing her feet from the too-small shoes she’d squeezed them into. Grace had warned her not to wear them. The lady’s maid had predicted this situation exactly, but the shoes were pretty. The trimming matched the trimming on her gown perfectly, and so she’d ignored Grace’s impertinent eye roll and worn them anyway. And then had suffered through three excruciating dances, because a Wildeforde kept her commitments and a proper lady wouldn’t abandon her dance partner.

Besides, Edward needed help to push his agenda forward and the right word in the right ear during a country dance could have a greater impact on the country than most would think.

She pressed gingerly on her heel. The skin bubbled. At this rate, the blister would be rubbed raw before the night was out, which was problematic because she had plenty more dances to go and conversations to have.

She could plead a headache and go home, but that would be its own form of discomfort. Her brother and sister-in-law both worked long hours. When they had free time, they cleaved to each other. In the past, she’d sought William’s company, but he’d been gone for almost four years. Her brother’s letters had been few and far between since he left to fight the war in Burma.

Which left Wildeforde House feeling a little lonely. And anything was preferable to loneliness, so she would dance until her feet could hold her no more, regardless of the blister.

There was a soft snick as the door opened, and she quickly dropped her skirts back over her knees, ready to stand and announce her presence. And then she heard it, the snide, nasally voice of her sworn enemy. Luella.

“This entire night is dreadfully dull. I’m ready to peck out my own eyes for some entertainment.”

“Don’t do that, Lulu. That’s such a pretty dress and Madame Genevieve would be livid to see it bloodied.”

Charlotte didn’t need to see Luella to picture the syrupy smile her nemesis would be doling out to her minion. The hairs on the back of Charlotte’s neck rose and she couldn’t help but grit her teeth.

“Why thank you, Annie. Lord knows it cost my father a pretty penny.”

Charlotte could believe that. Every season that went by, Lord Heywood invested more and more money into ensuring his daughter was the finest dressed young lady of the ton. As if that could make up for Luella’s personality. But you could wrap a viper in pearls, and it would still try to eat you.

“I know it’s early, but have we made a decision about this year’s debutantes?” came the voice of one of Luella’s hangers-on.

As stealthily as she could, Charlotte pressed one of the palm leaves aside so she could get a better look at the gaggle of girls. Luella, Lady Anne Ridley and Miss Howard. The two younger girls looked at Luella with what bordered on adoration. Luella only looked at herself in the mirror, touching at her perfect coiffure.

“They’re all insipid,” Luella said. “When was the last time a debutante took London by storm?”

Luella shook her head. “No. She was pretty and had a decent sense of style. But her dowry was paltry, and she only garnered three proposals.”

Charlotte was fairly certain Lady Elizabeth only garnered three proposals because the men of London were observant enough to realize she was madly in love with Lord Hillington, to whom she became engaged a scant two weeks into the season. Luella’s dismissal sounded an awful lot like jealousy.

“Miss Stansgate. Two years ago? She turned down six proposals before she accepted Lord Pearson.”

Luella wrinkled her nose. “Her eyes were set too close together. How six men saw past that, I will never understand.”

Yes, the jealousy was strong in Luella’s voice. Charlotte was surprised the others couldn’t hear it.

Luella’s eyes narrowed and her lips thinned. She grunted in response, and Charlotte took petty pleasure in being a lemon on Luella’s tongue. Before she could say anything, though, Lady Anne piped up. “Truly? Lady Charlotte?”

The disbelief in the young girl’s tone rubbed like sandpaper. Was it so unbelievable that she had burst onto the London scene like a firework?

Luella’s eyes turned to flinty stone as she ignored the conversation. Miss Howard, never the first to sense an undercurrent, turned to her friend to respond. “Oh yes. She had twenty proposals in her first season. No one has had that many in almost two decades.”

A crease formed between Lady Anne’s brows. “And yet she remains unmarried. Was there some sort of scandal?”

“No.” In the mirror’s reflection, Luella grabbed hold of Lady Anne’s gaze like a snake choking a puppy. “The rest of society simply realized what I had from the start. Lady Charlotte is an insufferable, sanctimonious do-gooder. Her constant charity-pushing is grating. Her perfect manners and perfect dress and perfect conversation make her perfectly uninteresting. She should have accepted a proposal when she had the chance, before she’d bored everyone. I’d be surprised if she landed a baron now.”

Oooh. That woman. No one could get Charlotte’s temper up like Luella. She shoved her foot back into the dratted shoes and stood. The potted palms that had concealed her rustled and three heads swept in her direction.

Two faces fell in horror when they realized who stood there. The third, Luella’s, simply smiled, and Charlotte had the distinct impression that Luella had known she was sitting there all along.

She took a deep breath, ready to fling insults back in their direction, because she would not let this woman best her. But as she opened her mouth, the words died on her lips. Because a Wildeforde did not engage in conflict publicly. Even if it was with the worst woman in London. A Wildeforde was measured and thoughtful, because one never knew when Edward would need her influence, and so her behavior had to be above reproach.

She snapped her mouth shut and Luella snorted, aware she’d won yet another battle.

Charlotte squared her shoulders and walked straight past them through the door. But it did not close quickly enough to avoid the words that floated through it.

“Do you see? I told you. Completely uninteresting.”