How to Survive a Scandal 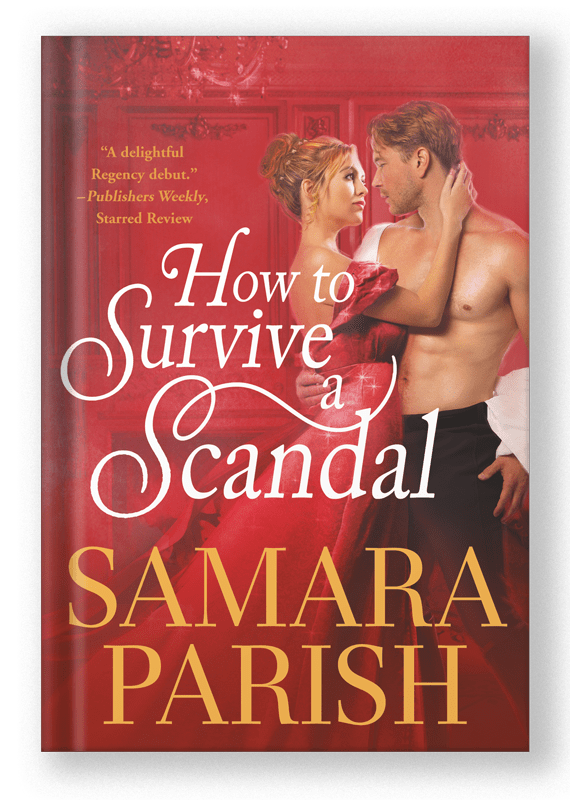 A marriage of convenience leads to true love in this sparkling Regency debut.

When Benedict Asterly rescues a woman who’s freezing to death, he thinks he thinks it’s just another good deed done. Until they’re caught alone post-rescue and forced to marry. Lady Amelia is judgmental, abrasive, and the opposite of the type of women Benedict had hoped to wed. But since propriety has forced them into marriage, he’s determined to make the best of it by convincing Lady Amelia to give up the trappings of London and get used to being a business owner’s wife.

Lady Amelia was raised to be the perfect duchess. So when she’s forced to marry an untitled gentleman, she’s furious. She was trained to run a household efficiently, not to do the cleaning herself. When Benedict’s business interests are threatened, Amelia realizes that she has the perfect opportunity to prove to her husband that London manners aren’t all bad. She’ll impress the visiting Americans looking to invest in his factory and show Benedict that she’s just the kind of wife he needs.

Order How to Survive a Scandal from Amazon, Apple, Barnes & Noble, Book Depository, Kobo, or from your local bookstore.

How to Survive a Scandal

Rebels With a Cause, Book 1

Order How to Survive a Scandal from Amazon, Apple, Barnes & Noble, Book Depository, Kobo, or from your local bookstore.

Benedict Asterly kicked in the door to the Longmans’ empty farmhouse. Despite the crash of splintered wood, the chit slung over his shoulder was as silent as a sack of last season’s grain.

Lady Amelia Bloody Crofton. Half dead, soon to be all dead if he couldn’t warm her up.

He lowered her onto the cold, uneven stone floor before the fireplace.

Damnation. There was no fog of breath, no flicker of pulse, no sign of life at all.

He’d almost ridden past the snow-covered carriage in his effort to get out of the storm. He’d been an idiot for traveling in this kind of weather but apparently not the only idiot on the road.

Why the devil was an earl’s daughter alone in a carriage all the way out here?

He pressed two fingers against her neck. Nothing. He pressed harder.

Th-thump…th-thump. It was faint. It was slow and erratic. But it was there.

He sagged with relief. The ropes around his chest, that had drawn tight the moment he’d seen her pale and unconscious, loosened.

He turned to the hearth and struck flint into the brush with shaking fingers. The scrape, scrape, scrape of steel on stone faint against the howl of the wind.

It caught, and he began the methodical task of building a fire. With each carefully placed stack, his racing heartbeat slowed. Thank God, Aldrich had restocked the wood supply before taking his children to visit their grandparents. Benedict had no desire to reenter the tempest.

Behind him, Lady Amelia muttered.

“I’m here. I’m with you.” He turned back to the woman who’d previously declined to acknowledge his existence. After all, a man like him was beneath her notice.

He tossed aside the coarse traveling coat he’d thrown over her and removed her gloves and pelisse, struggling with the weight of her ragdoll body.

Bloody hell she was cold.

How long had she been trapped in that broken-down carriage? At least she’d had the good sense not to leave it.

He took her soft hands in his calloused ones, bringing them to his lips, but his breath did little to warm them.

Unbuttoning the cuffs of her sleeves and rolling the fabric up her arms, he exposed as much of her bare skin to the seeping warmth as he could. Her skin was more than pale. It had a blue pallor that caused his heart to skitter.

“Just stay with me. Please.”

In a cupboard by the bed, he found some blankets. He pulled a knife from his boot to cut a piece and wrap the ends of her sodden blond hair. The rest he tucked behind her head and shoulders.

He untied the laces on her ankle boots and pulled the boots off, pausing at the sight of her stockings.

They were cold and damp. They needed to come off too. But a footman’s son had no place touching a lady. And this particular lady? The ice princess would skewer him with the poker if she knew what he was contemplating.

He turned his head aside, giving her all the modesty he could as he reached his hands under her skirts, fumbling with the ribbon of her garter.

“I’m sorry.” She couldn’t hear him, but just saying the words made him feel less of a cad.

He tugged the dark wool off her toes. The skin was red and like wax to touch—but it was only frostnip, not yet frostbite.

“You mustn’t…giant calling.” Her words were so slurred he struggled to understand them.

“I’ll bear that in mind, princess.”

Of all the idiotic things he had done, tonight’s escapade was the worst. The carriage had barely made it to the posting house. Instead of thanking God for the solid roof and warm fire, Benedict had left the carriage and its driver to go the last mile home on horseback.

He’d promised his sister he’d be home tonight, after a month away. Instead, he was stuck.

Feeling was slowly returning to his body, if not warmth. He covered Lady Amelia in his coat and then staggered to the bench that ran along the edge of the room. There was a kettle filled with water, sloshy and semi-frozen.

He dumped a small amount of tea inside, grabbed two mugs with his other hand and staggered back to the fire.

The intensifying flame was the best damn thing he’d ever seen.

He hung the kettle from an iron hook and turned back to his biggest problem.

She couldn’t stay on the floor.

There was a large, worn armchair in the corner. He moved it in front of the hearth, as close as he dared. What she needed was heat—and fast—but the fire hadn’t taken a chink out of the bitter shroud of the room.

There was one thing he could do, but damn she was going to flay him alive when she woke. He took off his jacket, pulled his shirt over his head, and picked her up off the floor.

He settled into the armchair, holding her against his naked chest, his bare arms resting along the length of hers. His body heat had to work.

The cold air was whiplike against his skin, and goose bumps covered his arms.

He looked down at the chit on his lap. Lady Amelia Crofton. Diamond of the ton. Leader of the fashionable set. Cold as the ice shards on the window. And Wildeforde’s bloody fiancée. Damn, this was a mess.

He exhaled hard, trying to steady his shivering through slow, even breaths.

“That’s not what I asked for.” Lady Amelia’s eyes flickered but failed to open. “I said blue.”

His laugh was shaky. “Well, tonight’s not what I asked for either. And I’m partial to grey.”

Her eyes fluttered open. The deep jade green caught the light of the fire.

“Put it under the horse.”

He snorted. Even half-dead, she was giving orders. But he would take them, if it meant she would live. Her eyes closed again, the long dark lashes resting against pale skin.

Her grunt was accompanied by a soft sigh—as innocent as a babe. If you were fool enough to believe it.

“Why the devil were you traveling alone?” The snow had been so deep around the broken-down carriage that only a glint of metal from the wheel had given any hint that someone might be in trouble.

There was no response, just a twitch of her nose.

After a long few minutes, warmth finally traveled up his legs. It was a superficial heat, not the bone-deep warmth that came from a hard day’s work, but hopefully it was enough to warm her.

She put a hand on his thigh and pushed herself up, faltering on her weak legs toward the fire.

His heart leapt to his throat as he lurched up and grabbed her dress, jerking her backward before she could fall into the flames. A dozen buttons popped free and scattered across the floor.

“You will be the bloody death of me.” He maneuvered her back to the chair, slumping her over it, her limbs sprawled like a green boy’s after his first trip to the pub. Not taking any more chances, he dragged the chair farther from the flames.

“I’ll get you your damn lemonade,” he muttered, turning back to the boiling kettle. Using the tongs by the fire, he poured tea into the two mugs.

She was every bit as high-horsed as he remembered. Although at least she’d deigned to speak to him—an improvement upon their last encounter.

The first few gulps burnt a satisfying trail down to his belly. It was the best thing he’d ever tasted.

“I have your lemonade, princess.”

He turned and nearly dropped the mugs.

The bodice of Amelia’s dress had pooled at her waist, leaving her in nothing but stays and a chemise so fine it was nearly translucent. His mouth turned to coal dust.

“I’m hot, too hot.” She yanked at the neckline of her chemise.

Bloody hell. He picked up the coat he’d tossed on the floor and tried to wrap it around her shoulders as she struggled to escape.

“It’s for your own good.” Of course, she would refuse help. It didn’t come on a gilded plate.

He wrapped one arm around her, pinning her to him. With the other, he stuffed the coat between them and tucked it beneath her armpits.

The fewer layers between her and the heat the better, but she was going to strip his hide with her barbed tongue as it was. Heaven help him if she woke half-naked.

Her struggling subsided, and he managed to lower the two of them back onto the chair. Her ribs expanded and contracted against his chest with increasing force, and the vein on the side of her throat thrummed with more regularity in rhythm.

She was getting stronger. Color was creeping into her skin. Her cheeks began to flush, and her lips slowly changed from blue to white, to a light pink.

No longer looking like she’d been pulled dead from the Thames, she was every bit as beautiful as he remembered.

Confident that she was going to pull through, he closed his eyes.

“I’ll have your rutting neck, you rutting bastard.”